At MJC we have have been taking a conscious effort to widen exposure of our girls by providing an insight into a wide range of professional possibilities. India Postal Department has come out with a recruitment drive and some of our students have decided appear for the entrance examination.
In the light of this interest in this career opportunity 16 of our interested College  girls went  to Sulur Post  Office to understand the activities of the postal department.  Mr S. Devaraj,  the Postmaster warmly welcomed the children.  He directed Mrs. Ramya  K,  Postal Assistant  Clerk  to give a brief She  gave a  helpful introduction of  the  Post  Office  and  its  functions.  It was an interactive  session  in English where the students were able to answer questions put forth.  Later  Mrs. T Jhansi, GTS MD took over.

Mr S. Devaraj then took  time from his hectic saturday schedule to personally give the students a tour of the office and its various counters. The students  for the  first  time  came  to  know   the  difference between ordinary post, speed post  and registered post  with their respective costs. He  also explained  the various  Saving  Schemes provided  by  the  Postal  department. Mr  S Devaraj  explained  in  length the  various schemes  available for  the  common  man  such  as – Monthly Income Scheme [MIS], Senior Citizen Saving Scheme Accounts[SCSS], Small  Saving Scheme Account [SSS], Sukanya Samrithi Scheme, Kisan Vikas Patra  etc.  He  introduced  his team members who  joined  as ordinary  postwomen and  have now  have reached  great  heights. Mr.S. Devaraj  gave  himself  as living  example –  he too  joined  as  an ordinary  postman  and  is  now  the Post Master  of Sulur. He  stressed upon  hard  work,  sincerity  and determination. He  also encouraged the  college  girls  by  giving  a  vivid picture  of  the  past  postal scenario  with  the  present, for example previously the  postman  had to walk on  improper  roads  and cycles  were  expensive  to purchase but  now  you can deliver  letters on  a  two-wheeler  which  makes your daily  trips  quicker, easier  and  less  tiring. Photographs  were  taken.  Everyone  enjoyed  themselves. It  was strongly  felt by  the  students  that  there  should  be  more  of  such educational  trips  in the  near  future  for  more  exposure,  better understanding   and  for better development of  the  girls.

This  Postal visit  was  a  great  exposure  for  all, both students  and  staff. We thank Mr S  Devaraj, Sulur Post Master  and  his  staff  for  taking  time  to encourage  the  girls  and  to equip  them  with  relevant  knowledge.  We thank Dr Lali Thomas,  Mr Joseph  Elias, Mr  P V Kuruvila, Mr Lijo  John and Ms Dorothy Lawrence for  their support. 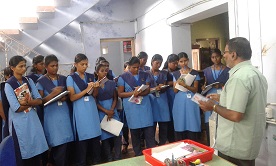 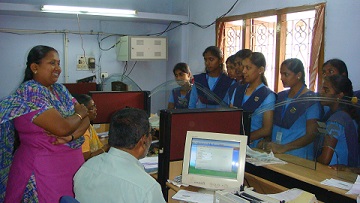 MJC DIGITAL TALK SERIES – “I Believe I Can Fly” with Dr. V.P. Joy